World On Film Exploring the world through global cinema

Michael Read, troubled by demons in 'The Boogeyman'

In the early 1980s, a number of Stephen King short stories were filmed on a low budget and subsequently released on VHS as Stephen King’s Nightshift Collection. Timewise, they fall in between two of the master of horror’s two big screen successes, The Shining and Cujo, though it’s more interesting to note that this is the time of Creepshow, the more celebrated anthology of King short stories that would go on to see two big-screen outings. I happened to catch two Nightshifts this week, namely The Woman In The Room and The Boogeyman. They are very much of their time in terms of pacing and characterization, and certainly not in any way lavished with financial beneficence.

At the same time, however, they are uncomplicated character studies requiring little window dressing beyond a basic set. Some King fans may be put off by the fact that they are more psychological thriller than horror, but they lack nothing of his familiar style. In The Woman In The Room, a young man watching his hospital-bound mother must come to terms with the harshest reality a filial son can face, while in The Boogeyman (directed by a certain Frank Darabont), a father has to battle the demons plaguing his family – but are they the product of a malevolent underworld or something far closer to home? Ultimately, the Nightshift Collection is no Creepshow (‘The Raft’ being probably one of my favourite of the stories), but it is still an enjoyable diversion.

“They are more psychological thriller than horror, but they lack nothing of his [King’s] familiar style”

This week, World On Film heads to the twin-island nation and former British colony of Antigua & Barbuda – St. John’s, Antigua, to be precise, for the independent film:

You’ll find a trailer at the bottom of last week’s entry. In addition to that, you can watch this film freely on the company’s website: http://www.tropicalfilmsantigua.com/ (go to the ‘Showcase’ section).

Hooked is the first quasi-cinematic offering from Tropical Films (Antigua), an independent group of film-makers keen to redress the imbalance caused by the vast wealth of Hollywood offerings compared to the trickle of Caribbean cinema. Indeed, IMDB lists only 5 films for the country of Antigua & Barbuda, where the group is based, and 2 of those are documentaries. In the words of TF(A), ‘Few Hollywood movies portray people that look like us or tell stories with which we feel a real connection.’

Certainly no argument there, which is why I found it rather odd that the unrequited love story that unfolded across the 40 minutes of Hooked was tremendously easy to connect with, despite my not being remotely of Caribbean ancestry, never having ever set foot in that part of the world, and the fact that it tells a very universal story. The plot essentially underpins Woody Allen’s response to media critics panning his relationship with Soon-Yi – ‘The heart wants what it wants’. This is indeed true for Penny Burns, whose heart is manacled uncompromisingly to former lover Damian, her rather violent ex set to be released from prison. The day of his release is her cue to end her subsequent relationship with replacement beau Benjamin, except that after devoting two years of his life and energy to her, not to mention being head over heels in love, he isn’t willing to let her go so easily. However, he soon finds himself engaging in a fight only he wants to win, the realization for which comes with swift and unmerciful punishment. I’m pretty sure people the world over will find ‘a real connection’ with this, one of the most basic of romance tragedies. After all that hype, I was expecting a penetrating study of the uniqueness of Caribbean culture and the way in which it differs from post-equatorial climes, not a glorified episode of ‘Neighbours.’ Perhaps the whole ‘people that look like us’ really means ‘people who are us’.

“After all that hype, I was expecting a penetrating study of the uniqueness of Caribbean culture and the way in which it differs from post-equatorial climes, not a glorified episode of ‘Neighbours.'”

The eternal triangle: Carl Christopher as Damian, a lethargic presence.

The second of TF(A)’s bold claims for their film-making is that they aim ‘To create stories that are exciting and that capture the imagination. Nothing will be produced by us unless it is based on a well written, absorbing screenplay.’ Yet Hooked suffers from some truly horrendous, clichéd dialogue (‘This is not over yet, jailbird. I promise you – this is not over!) that even dialogue disaster master Dan Brown wouldn’t touch. This might almost be mitigated with the presence of creative acting talent, however Hooked is not at any time populated with anyone skilled in the craft – simply enthusiastic amateurs either desperately over-the-top (Dennis Hunt), or so wooden, they could start a new forest (Monique Fairclough), with the cast never reacting to each other, but simply standing there blankly until the time comes to deliver their next line. In one scene, an actor playing a prison warden has so much trouble delivering his lines that there seemed a very real possibility of him passing out halfway through. All of which presents a major challenge for the audience if they are to find Hooked ‘absorbing’.

The production values, meanwhile, are a separate matter. While the location budget is virtually non-existent, the camera-work is accomplished and the picture treatment provides the ‘film look’ anyone in the industry knows is good for hiding a multitude of sins. It should do after all, since the producers make the point that they purchased top-of-the-range equipment for their projects. Yet their talents do extend beyond their pocketbooks. Nigel Trellis may not know how to write an original script with realistic dialogue, but he does know what he wants from a technical point of view – scenes are well-paced and only seem to drag because of the bad acting. Editing is competent and the soundtrack fits the melodrama. He fails to understand however that having even the technical budget of James Cameron cannot compensate for the lack of performance. As he says himself, his goal is to ‘portray people’ and with this the weakest element of the whole production, Hooked can do little but implode in upon itself – not the most desirable means of attracting television distribution within the region – the company’s ultimate aim.

“[Director] Nigel Trellis may not know how to write an original script with realistic dialogue, but he does know what he wants from a technical point of view – scenes are well-paced and only seem to drag because of the bad acting.” 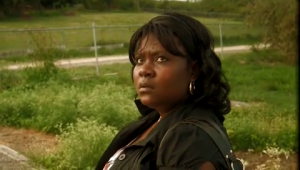 Hope Burns as Monique, presumably horrified by her sudden lapse into genuine acting.

What makes this truly disappointing is that I am 100% behind their goals – to bring a greater Caribbean presence to the cinema, which is indisputably lacking. It was precisely because I wanted to see a film from Antigua & Barbuda (and having failed to get my hands on the efforts of Howard Allen – Antigua’s celebrated professional film director) that I was so pleased to discover that somebody wanted to do something about it (not to mention that their efforts were available to all for free via their site, not to mention Facebook and youtube). I’m on board – I want ‘stories that are exciting and capture the imagination’ from the Caribbean and hope its rich and varied culture will find new audiences. Hooked, however, isn’t going to be the conduit through which it happens. Tropical Films (Antigua) is a great idea, but if they want to tell stories about people, the people they use must be capable of telling those stories. Hopefully this is a reality they are willing to face.

From the terrible to the terrific. Genuine relationships, heartbreak, intrigue, murder and mystery in the excellent 2008 Argentinean film The Secret In Their Eyes. A subtitled trailer can be viewed below: