World On Film Exploring the world through global cinema

You are reading World On Film, the blog that each week explores the world through cinema. Before I get started on this week’s entry, I thought I’d take a moment to mention a couple of other films I’ve enjoyed this week. First up, Christopher Nolan’s new action thriller, Inception. It unfortunately stars Leonardo di Caprio, but don’t let that put you off Nolan’s take on the power of suggestion and an entertaining rollercoaster ride through the world of dreams. To the sci-fi fan, it explores concepts that are nothing new: controlling people’s minds by implanting ideas, questioning whether life is an elaborate dream or we are yet to wake up from what we perceive is reality, but fans of Nolan’s work shouldn’t be disappointed by the execution, with solid performances all round. If like me you’re into sci-fi, check out Moon, a 2009 low-budget space mystery that combines elements of Blade Runner and 2001: A Space Odyssey to create a truly gut-wrenching and thought-provoking tale, elements of which may come true in the not-too-distant future. After being less than impressed by his performance as Zaphod Beeblebrox in 2005 remake of The Hitch-hiker’s Guide To the Galaxy, I didn’t think Sam Rockwell had it in him to headline a film, but he does and it’s worth checking out.

All of which is not really within this blog’s remit, so moving closer to home now, as it were, if a film dealing with events leading up to the Bangladesh civil war appeals, The Clay Bird does just that. I’ll be covering it in this very blog when World On Film reaches Bangladesh, which I expect will be…er…I’ll get back to you on that. Right now though, we’re off to Algeria for the excellent 2002 drama, Rachida. Last week, I posted the trailer. If you missed it, you can watch it right here (I can’t get the embed code to work properly for some reason).

Written and directed by Yasmina Bachir.

Part of World On Film‘s raison d’etre, so to speak, is to explore the world through a medium I enjoy and it’s great when a film inspires me to learn more about its country of origin, shining a light into the many gaps in my global awareness.  Prior to watching Rachida, I knew very little about Algeria other than the fact it was a former French colony and one long-suffering from civil conflict. The latter point is something of an understatement, for Rachida examines the effects of the Algerian Civil War on the lives of its citizens and the impact the ongoing terrorism had on both their lives and psyches. If only to better appreciate the story, I quickly found myself googling this dark and recent chapter in the country’s history. Although still ensuing in some parts of Algeria today, the war principally ran between 1991 and 2002 and was sparked by the rising popularity of the Islamic Salvation Front party (FIS). Fearing they would be overthrown, the incumbent National Liberation Front cancelled the nation’s forthcoming elections and declared the opposing party illegal. The country came under military rule and in response to the banning and arrest of many FIS party members, Islamist guerrillas took up arms and engaged in a prolonged battle with the government and all who supported it. Forming into several groups, the Armed Islamic Group (GIA) rampaged through the towns, initially targeting only the authorities, but many soon turned their attention to the civilian population. Over a span of 11 years, upwards of 200 000 lives were lost. It has been alleged that some of the killings were conducted by government agencies, who then publicly blamed the Islamists for the deaths.

Moments of transition: Rachida is drawn into the conflict, never to be the same again. 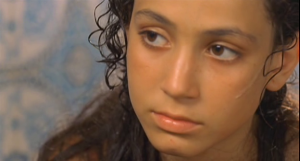 A day in the life: citizens face death at any moment.

This then forms the backdrop of the film, set somewhere within that time frame. Rachida is a young female school teacher in Algiers, for whom life is good: she has a stable and fulfilling job, a happy home life and a steady boyfriend. The peace is shattered one day when she is confronted and subsequently shot by a former pupil, now a member of a GIA splinter group intent on delivering a very explosive message to the government. Sent into a country town with her family in order to recover from her ordeal, Rachida finds that while physical wounds may heal quickly, psychological wounds are ever-lasting. And with the town held captive by continual and random guerrilla attacks, any chance of a true recovery is dashed.

I do think this is the kind of film for which you need a basic historical background in order to truly appreciate the magnitude of the conflict, yet it’s important to note that Rachida’s primary themes are not the political underpinnings of the war, and the film assumes the viewer already knows the details. It is essentially a study in the effects of terrorism, both the life-changing impact of a single incident of terror, and life under the ongoing presence of fear and death. The town becomes Algeria in miniature, with families losing loved ones, abductions and the constant pall of uncertainty over whether ‘they’, as the characters frequently describe the militants, are coming. ‘They’ the oppressors, rather than ‘they’ the religious fundamentalists or political insurgents, with the dialogue often asking of the viewer the root cause of the growing madness.

“Where was all this hate buried? This cruelty, this barbarity? These hearts deserted by all humanity.” 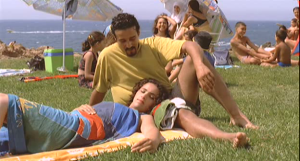 A rare moment of peace amidst the chaos.

However, it doesn't last long.

The scarring effects of terrorism, never to be undone.

… … … … … … … … … … … … … For the most part, however, the focus is on the impact of terror itself, with Rachida herself an allegory for the national character – an ordinary person trying to live an ordinary life, but being beaten down by fear. However, unlike many of the townspeople for whom fear has cowed into silence, Rachida’s anger gives her a strength even she isn’t aware of: an anger to ask the questions others feel there is little point in debating. In every group, there is always one person who stands up to the madness, not borne of heroics, but because they cannot do otherwise – it’s simply who they are. Ultimately, the film offers a ray of hope in the encroaching darkness that the human spirit is not always crushed.

“In every group, there is always one person who stands up to the madness, not borne of heroics, but because they cannot do otherwise – it’s simply who they are.“

As the first Algerian film I have seen, I found Rachida to be a very strong offering indeed, generally well-structured and well-paced, with a cast of actors whose performances at no time failed to convince. Ibtissem Djouadi, as the title character, is excellently cast and capable of a great range of emotion – her eyes a window into her alter-ego’s troubled soul. There were times when I felt the narrative wasn’t sure who its subject was: the film often spends time being a character study on its lead, which results in a very effective personal drama depicting the effects of war on the human psyche, but at other times seems to veer off on tangents with the lives of unconnected secondary characters, attempting to be a sort of ‘ensemble narrative’ – a village under siege trying to survive. Both approaches are equally valid and worth exploring, but I felt they were not properly integrated. It suggested the producers felt that their initial approach wasn’t strong enough to sustain a feature-length effort and the scope needed to be widened.

However, this does not mar the principal aims of the film’s discourse and I have no difficulty whatsoever in recommending Rachida. As an insight into the Algerian conflict, it is very human, as a drama, it is very compelling, and as a film, it is quite effectively done.

Next on World On Film: Madness of a different kind. A self-confessed idiot drifts aimlessly through life until he meets the girl of his dreams, for whom he will stop at nothing to obtain. But if this is a Catalonian film, what does it have to do with the principality of Andorra? Find out when I review Amor Idiota. An unsubtitled trailer can be viewed below. Be advised: adult content.

This entry was posted on July 31, 2010 by benjjordan. It was filed under Drama, Film, History, War and was tagged with Africa, Algeria, drama, film, Ibtissem Djouadi, Rachida, terrorism, war, Yasmina Bachir.